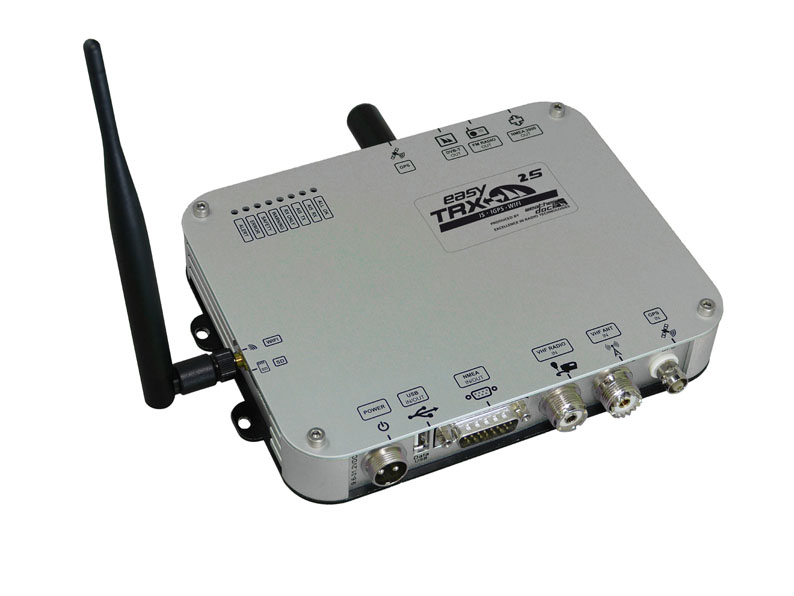 All devices of the easyTRX2S series are performing with a lot of useful features:
By means of USB port connection to PC or Laptop is possible. With contained software it can be chosen between 38400 or 4800 Baud data rate. Function activity is shown by 8 LED’s.  The easyTRX2S is able to interpret incoming AIS data for CPA alert or AIS S.A.R.T. emergency messages. Additional the easyTRX2S devices can be used as power source for external alerting devices. All received and transmitted AIS data can be stored with internal SD Card recorder. With the build-in multiplexer input 3 devices with different baud rate can be pluged to the easyTRX2S units. At least the external cable harness gives the possibility for outsourcing functionaly like “change into silent mode ” or “PAN PAN emergency call” by switch.

The integrated VHF antenna splitter enables to use an existing VHF for AIS and HF radio at the same time. Before the incoming signals are separated, the built-in pre-amplifier increases the signal strength to avoid physical loss.
The integrated GPS antenna is the new part of this AIS transceiver unit. This reduces the need of an external GPS antenna mounted on deck if the easyTRX2-iGPS-N2K-WiFi is going to be used in Polyester boats.
For stainless steel vessels this unit is not useful. Here you have to connect a separate GPS antenna to the unit.The easyTRX2S units with the appendix “IGPS” contain a integrated GPS antenna with 50 channel receiver. These units are designed for the use on polyester boats because there is no GPS interference. The ClassB can be mounted under deck but above sea level.

The easyTRX2S-WiFi transmits according the AIS-Class B standard all own AIS data like ship name, speed and course over ground, etc. to every AIS receiver or transceiver within its radio range. Using the easyTRXS2-WiFi is the simpliest way to make yourself visible to others, having all necessary information about your surrounding too.

Running the “easyAIS” App, you will see a radar screen appearing, showing all received AIS targets within range. A click on a target will prompt you detailed information to this specific target, such as ship’s name, speed and course over ground, etc. Additional information to your own boat’s navigational status like your own speed, course, wind, etc. are available through sub-menues of the App, if you feed the easyTRX2S-WiFi built-in multiplexer with boat information.